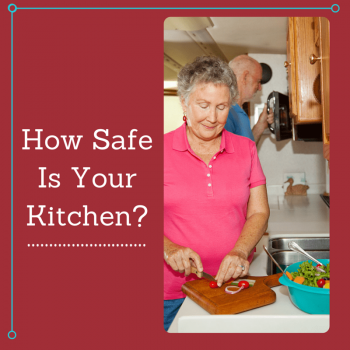 World Health Day is April 7 this year. We eat every day without giving it too much thought. But whenever we get a stomachache we are quick to blame the food we have eaten. It might have been the fish we ate at the restaurant. But it might also have been something prepared in our own kitchen.

How Safe Is Your Kitchen?

It is important to prepare fresh food in a clean kitchen. A kitchen that looks clean can still contaminate food. The counters where we assemble recipes should be cleaned and disinfected daily using a commercial preparation or old-fashioned cleanser with bleach. Also clean and disinfect frequently touched surfaces like the sink, refrigerator, oven and cabinet handles. Washing hands thoroughly before beginning food preparation is also critical. Keep a separate towel for drying hands and drying dishes and never wipe unwashed hands on a kitchen towel unless you immediately put it in the laundry to be washed.

According to foodsafety.gov, a recent study from Kansas State University showed that the kitchen towel was the number one source of cross contamination in the kitchen. Kitchen towels became contaminated because cooks in the study used them to dry hands that were not washed properly. The towels were then used to dry or wipe hands multiple times allowing the bacteria to spread. The researchers found tracer bacteria on 90% of samples taken from the fruit salads prepared during the study. 82% of participants contaminated the sink, refrigerator, oven or trash cabinet handles with the tracer bacteria.

Another culprit in spreading germs can be the sponge or dishcloth you use to wipe counters. Use a separate cloth for cleaning than the one you use for washing dishes. Throw them in the laundry on the hot cycle to wash them at least weekly. Even so, germs can accumulate and thrive in the dampness. To kill these germs, dampen the sponge or dishcloth and put it in the microwave oven for two minutes on high. Leave it in the microwave to cool off or use tongs to take it out – it will be very hot and very clean.

If possible, keep a separate surface for preparing meat. One cutting board for meat and another for fruits, vegetables and cheese is ideal. Any surface which meat touches should be given extra care when cleaning and disinfecting. You need to wash your hands during meal preparation, too. Wash hands completely when you start cooking, after handling raw meat, raw meat packaging, and raw eggs, and after throwing away trash. If you don’t, you could easily contaminate other dishes you are preparing.

Avoid splash and dash with hand washing. Water is not enough to rinse away bacteria. You can remove the visible food particles on your hands with running water but you are not removing the dangerous bacteria. In order to remove bacteria, you need both soap and water plus the friction of rubbing hands together with soap. Avoid spreading bacteria around your kitchen by washing your hands with soap and warm water for at least 20 seconds.

Who would have thought that food safety would have so little to do with food and so much to do with towels, sponges and dishcloths? You don’t want to poison yourself or your family. Wash your hands with soap and water repeatedly while cooking. Use paper towels only once, then throw them away. Clean and disinfect surfaces and dishcloths. Only dry thoroughly washed hands on the kitchen towel. It could save you and your loved ones from a bad intestinal upset. That’s not too hard, is it?