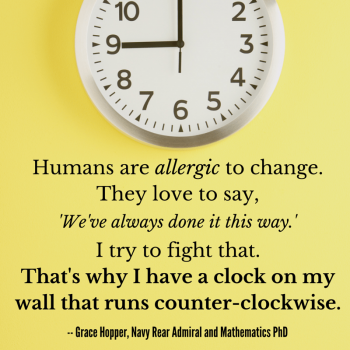 The military experience is something millions of Americans have shared across generations. Whether they were career military or were in for a short time, veterans offer a hard-earned perspective on many topics, from fear and motivation to war and peace.

On dealing with fear

Heading into the unknown requires a level of bravery most people never need to summon. Veteran Marine Corp combat pilot and astronaut John Glenn called on that bravery in 1962, when he became the first American to orbit the earth.

“Are you apprehensive about the situation you’re in?” Glenn said in 2012. “Yeah, but you volunteered, you want to do this thing, it’s important for the country, and you’re glad to have been selected for it, and you’re going to do the best job you can possibly do.”

Professional golf legend Lee Trevino joined the Marines on his 17th birthday, served as a machine gunner, and attributes his fearlessness in part to his military experience. “I’m not scared of very much. I’ve been hit by lightning and been in the Marine Corps for four years.”

The military sometimes trains people for very particular jobs, and music legend Johnny Cash was one specially trained veteran. “The Air Force taught me the things every military service imparts to its enlisted men … plus one skill that’s pretty unusual: if you ever need to know what one Russian is signaling to another in Morse code, I’m your man.”

Cash also owed his first name and first guitar to his service. He changed his name from J.R. to Johnny to comply with Air Force enlistment requirements, and he bought his first guitar with his military pay while he stationed in Germany.

Retired astronaut and former Air Force instructor pilot Eileen Collins was the first woman to command a Space Shuttle mission. Collins’ time in the military helped her to realize her childhood dreams.

“When I was a child, I dreamed about space. I admired pilots, astronauts, and I’ve admired explorers of all kinds. It was only a dream that I would someday be one of them. It is my hope that all children, boys and girls, will see this mission and be inspired to reach for their dreams, because dreams do come true.”

On getting things done

Navy Rear Admiral and mathematics PhD Grace Hopper spent her career developing military and business computer technology. A reservist for decades after WWII, she was called back up by the Navy when she was 60 years old to take on a computer communications project.

Hopper’s trailblazing career was matched by a drive to embrace new ways of thinking. “Humans are allergic to change. They love to say, ‘We’ve always done it this way.’ I try to fight that. That’s why I have a clock on my wall that runs counter-clockwise.”

On the power of positive thinking

US Army Special Forces Master Sergeant Roy Benavidez was a hero’s hero. The Green Beret was shot multiple times, hit with grenade shrapnel, and bayonetted after he volunteered to help medevac wounded troops out of a Vietnam War battle zone in 1968. Despite sustaining such severe wounds that doctors who saw him after the rescue assumed he was dead, Benavidez was able to call for air support, administer first aid to the wounded, recover classified documents from the battleground, and rescue 8 fellow soldiers from the scene.

Benavidez received the Congressional Medal of Honor for his service, and there was a GI Joe action figure based on him. Benavidez told the media he disliked the hero label and was just doing his job. For Benavidez, attitude was the key to success. “Our future leaders must possess faith, determination, and a positive attitude. I believe a positive attitude will carry you farther than ability.”

Medicare FAQ
What is a Durable Power of Attorney?