World Heart Day: The True Story about the Man with an Unstoppable Heart 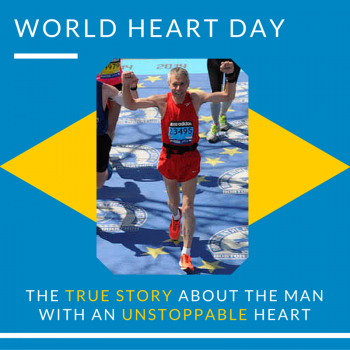 In honor of World Heart Day, a day dedicated to the world’s largest intervention against cardiovascular disease, I’d like to share an incredible, true story about the Man with an Unstoppable Heart.

Before I share the Man with an Unstoppable Heart’s inspirational story, it’s important to know his background. The Man with an Unstoppable Heart is a devoted and supportive husband, father and grandfather, a former High School Class President, a Fightin’ Texas Aggie college graduate, an admirable United States Army officer, an honorable Vietnam veteran who not only went to war for our country but led a band of incredibly brave soldiers as a fearless reconnaissance platoon leader, a talented artist and writer, an adventurous mountain climber of some of Colorado’s difficult fourteeners and a tireless marathon runner. And that’s just the short list!

Over his lifetime, the Man with an Unstoppable Heart has put his full heart into everything he has done, no matter the set back, risk or fear involved, he has kept charging forward, pushing through obstacles and unimaginable heartache. Next on the Man with the Unstoppable Heart’s big life goal list was to “run through the tape” at the Boston Marathon after qualifying at the age of 68.

After repeated and unwavering attempts to bring him back to life by his wife and daughter and a quick-response police officer, all hearts were starting to break. It wasn’t until an amazing team of paramedics rushed to the Man with an Unstoppable Heart’s side to bring him back to life. With their tireless rescue attempts, the Man with an Unstoppable Heart’s legs suddenly started moving in a running motion, showing signs that he was ready to start running an entirely new race…the race of his life.

After his near death experience, the Man with the Unstoppable Heart beat the odds as his doctors told him a mere 4% survive cardiac arrest with CPR outside of a medical setting and of that miraculous group, only 2% live without brain damage.

I recently had a brief phone conversation with the Man with the Unstoppable Heart and asked him what advice he would give to others who are in similar life stages or who are facing their own health struggles. Here’s what he shared with me:

“For the golden years to be golden, you have to go against the grain and do things you don’t expect people to do. Everyone is in a race against himself or herself. Don’t let your race be the race that someone else has picked for you. Run the race you want to run and train for that race.

There’s daily maintenance of old age (such as aches and pains in the morning), and you have to prepare yourself and fight through it. That said, it’s even more important to eat healthy foods and be kinder to your body the older you get.”

On a personal note, the Man with the Unstoppable Heart has made a huge impact on my life as he inspires me every day. He is one of my guiding lights who reminds me to never give up, put your heart into everything and always “run through the tape.”

I’m so incredibly honored to call the Man with an Unstoppable Heart by another name…Dad.

Natalie Drugan is a nutrition and lifestyle health coach. Natalie is dedicated to helping others make healthy choices centered on clean food, toxic-free environments and happy living. Natalie received her nutrition health coaching certification from the Institute for Integrative Nutrition in NYC, the world’s largest nutrition school. As a Certified Nutrition Health Coach, she studied over 100 dietary theories and learned from world-renowned experts and doctors including Andrew Weil, MD, Walter Willet, MD, Mark Hyman, MD and Deepak Chopra, MD. Natalie is board certified by the American Association of Drugless Practitioners (AADP). Additionally, Natalie received her BBA in Marketing from Texas A&M University.

What Is Adult Day Care?
Gifts for Dementia Patients