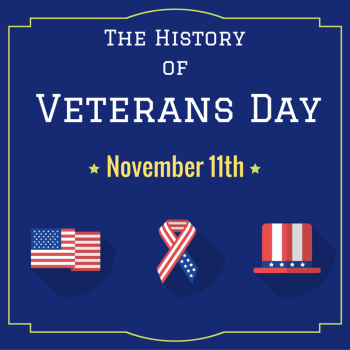 On Veterans Day, Americans honor the bravery of all United States military service members. The very day that we celebrate is important. At the eleventh hour, on the eleventh day of the eleventh month of 1918 the Allies signed the Armistice which ended the Great War, as World War One was then called. In 1919, the first anniversary became a day to celebrate the veterans who fought for the Allied cause. Two minutes of silence, marked by stopping all work from eleven AM until 11:02, became a popular way to celebrate. The two minutes of silence was supplemented by parades and speeches where the American flag is prominent.

President Woodrow Wilson proclaimed November 11th to be Armistice  Day, or Remembrance Day. In 1926 Congress passed a resolution for Calvin Coolidge to also proclaim Armistice Day on November 11th. In 1938 it became a national holiday dedicated to world peace.

Raymond Weeks of Birmingham, Alabama, was a Word War Two veteran who led the movement to change Armistice Day to Veterans Day. In 1954, President Eisenhower agreed and changed the name of the holiday to Veterans Day in order to recognize the debt Americans owe to all servicemen and servicewomen, not just those who served in World War One.

The Uniform Holidays Bill briefly moved Veterans Day to the fourth Monday in October from 1971 to 1975. But President Gerald Ford changed it back to November 11th. The exact date is of such importance that the federal government was willing to give up a three-day weekend.

Veterans Day is different than Memorial Day. On Memorial Day we remember those who gave their lives fighting for America’s freedom and visits to military cemeteries are prominent. Veterans Day celebrates all veterans, both living and dead.

There are around 23.2 million current and former service personnel in the United States. California, Florida, Texas, New York and Pennsylvania each count more than one million veterans among their populations.

Certainly the hundreds of men and women who have left behind their families and their regular work to answer the call to arms are deserving of respect and honor. They have subjected themselves to rigorous training, they have been willing to go where needed, even into the face of death when required. These members of the armed forces have sacrificed to the utmost, even to their life’s blood spilled on foreign fields. While they have done difficult duty we have slept safely in our beds because they have made it possible. We honor not just those who served in World War One, but in every conflict since then and between times of war so that the United States would be ready in case of attack by another nation.

We take this Veterans Day to honor and salute you, all who have served. As President Woodrow Wilson famously declared in 1919, “To us in America, the reflections of Armistice Day will be filled with solemn pride in the heroism of those who died in the country’s service and with gratitude for the victory.”

Are you a veteran or surviving spouse paying for senior care? You may be eligible for up to $2,120 monthly thanks to the Aid & Attendance Pension Benefit. Learn more at VeteranAid.org.