Dementia vs Alzheimer’s: What’s the Difference? 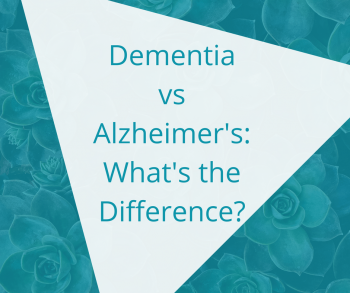 Dementia affects a significant number of seniors. So does Alzheimer’s. Both subjects get talked about a lot these days, which causes some people to wonder: just what is the difference between dementia vs Alzheimer’s?

To start, you should understand what dementia is. According to the World Health Organization, dementia is characterized by “deterioration in memory, thinking, behaviour and the ability to perform everyday activities.”

The term isn’t used to describe a specific disease, so much as a collection of symptoms that can be caused by a number of different diseases.

While it’s normal for seniors to start having memory issues the more they age, dementia goes a few steps further. When seniors start to lose the ability to finish sentences because they can’t remember how they started, lose track of what day or month it is, and have difficulty making basic financial and life decisions, they’ve likely tipped from normal memory loss into dementia and families should get them to a doctor.

Alzheimer’s is the leading cause of dementia.

Alzheimer’s and dementia aren’t synonymous terms, but everyone who has Alzheimer’s either already has or will have dementia. The confusion is natural though, as the vast majority of dementia cases – around 75% – are caused by Alzheimer’s. And it’s not always possible to diagnose Alzheimer’s with 100% accuracy, so a doctor’s first guess in encountering someone with dementia is likely to be that they’re exhibiting signs of Alzheimer’s.

While most seniors with dementia have Alzheimer’s, it’s possible to have dementia that’s caused by any one of a number of other disorders.

Other Diseases that Cause Dementia

In addition to Alzheimer’s, seniors diagnosed with any of the following are also likely to show signs of dementia:

As you can see, dementia can be caused by a number of diseases and factors other than Alzheimer’s, and yet it still makes sense for the two terms to be closely linked. For most seniors that struggle with dementia, Alzheimer’s is the most likely culprit.

Kristen Hicks is an Austin-based copywriter and lifelong student with an ongoing curiousity to learn and explore new things. She turns that interest to researching and exploring subjects helpful to seniors and their families for SeniorAdvisor.com.