What We Can Learn from This 94-Year Old Inventor

SeniorAdvisor.com Blog > Blog for Families > Senior Health & Fitness > What We Can Learn from This 94-Year Old Inventor

What We Can Learn from This 94-Year 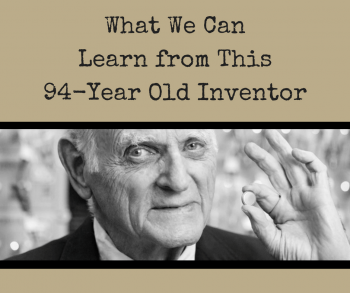 A 94-year old engineer at the University of Texas at Austin has developed a new type of battery based on glass, of all things, that could finally make fully electric cars a practical, popular choice. John Goodenough is a great example of active, engaged senior living, the upside of working past retirement age, and the benefits that come with experience and wisdom. We may not all be able to create world-changing technologies, but we can all follow his example and keep our minds active as we age.

What this senior’s invention means for the planet

The technology world is marveling at Goodenough’s battery. It’s made from glass and sodium extracted from seawater and it charges faster, lasts longer and will cost less than the lithium-ion batteries that run our portable electronics and electric vehicles. It also can’t burst into flames the way lithium-ion batteries can. (Goodenough invented the tech inside those batteries, too, by the way, and they’re “contained in almost every portable electronic device ever sold.”) The UT team, led by Goodenough and senior research fellow Maria Helena Braga, plans to build large-scale versions of the glass battery to store energy made by rooftop solar panels for use at night and on cloudy days.

All of this is good news for the planet. A fast-charging, long-range battery for electric cars could mean fewer fossil fuel emissions into the atmosphere. A battery that can be recharged more often than lithium means fewer spent batteries in the landfill. More solar power means less reliance on polluting fuel sources for electrical plants. Not a bad payoff for a man whose career could have ended nearly 30 years ago, if he’d chosen to retire at 65.

What we can learn about aging well from John Goodenough

Goodenough’s life reads like a catalog of scientific achievements, and also like a checklist of things we can all do to some extent to keep our minds as sharp as possible as we age.

Keep learning. For a scientist, this is part of the job, For the rest of us, it’s a habit that can reduce the risk of dementia or delay its onset. You don’t need to earn a PhD in physics, but you can find local or online classes that interest you, travel to new places when you can, read about new topics, and try to meet new people.

Perservere. Goodenough’s professional life has not always been fair. Due to patent rules at the university where he worked on his lithium-ion technology decades ago, he’s received virtually no income from the many businesses that use his creation. As Newsweek wrote, “The inventor of a technology that changed the world should be a multibillionaire but isn’t.” Goodenough kept working in the field he loved anyway. Every one of us faces a huge disappointment or obstacle at some point in life, and moving past it is a good goal.

Have a sense of purpose. Each of us can do something to leave our part of the world better than we found it. In past interviews, Goodenough said he felt time pressure to develop a breakthrough, because he thinks humanity has just a few decades to shift away from fossil fuels to prevent resource wars and unmanageable climate impacts. He made it clear that he held himself responsible for doing the work. “I want to solve the problem before I throw my chips in,” he told Quartz magazine. “I still have time to go.”

Learn more about keeping your mind healthy and aging well on the SeniorAdvisor.com blog.

5 Tips for Maintaining Social Connections as You Age
What’s a Durable Power of Attorney and How Can It Help Your Family?