SeniorAdvisor.com Blog > Blog for Families > Alzheimer's Care > Are These Common Medicines Putting Your Parents At Risk?

Are These Common Medicines Putting Your 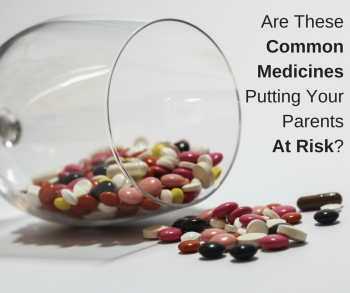 A recent story in the Washington Post described how the writer’s 95-year old mother became psychotic and nearly died after taking one antihistamine tablet for a skin rash. Her case wasn’t a fluke. If you’re taking care of an older family member, you need to know that a common class of drugs called anticholinergics can cause dementia symptoms, psychosis, and other health problems in people over 65, even if they never had problems with such medicines when they were younger. Here’s what you need to know about these common medicines and their potential impact on seniors.

Not all anticholinergics are antihistamines, although many are. The University California at San Francisco’s Memory and Aging Center lists Benadryl, Tavist, Chlor-Trimeton, and Actifed among common anticholinergic allergy medications. Other types of anticholinergic medication are tri-cyclic antidepressants like Elavil, Sinequan, and Norpramin, as well as some muscle relaxants (Robaxin, Flexeril) and sedatives and sleep medications. You can find the whole UCSF list of antocholinergics for dementia patients to avoid here.

What are the risks to seniors of anticholinergic medicines?

As with all medicines, there’s a risk of side effects with anticholinergics. For younger adults, typical side effects include dry mouth, sleepiness, headaches, and nausea. For older adults, though, more serious side effects can come on quickly. They include hallucinations, confusion, insomnia, aggressive behavior, fever, and vision problems. Dizziness is a particular problem for older adults taking anticholinergics, which can raise their risk of falls. If your parent shows any of these symptoms, take them to the emergency room, along with the medications they’re taking.

Even if your parent has been taking these medications for a while with no obvious side effects, some health studies have found a correlation between long-term anticholinergic use and dementia symptoms. The longer the study participants took anticholinergics, the more likely they were to develop dementia over the 10-year period researchers studied.

Anticholinergics affect the production of acetylcholene, which helps move nerve impulses through the brain and the rest of the body. Because most of us produce less acetylcholene as we get older, anything that further reduces the amount of it in our systems can have an outsize impact on our health. People with some types of dementia have below-normal acetycholene levels even for older adults, which means that anticholinergics can have dangerous side effects.

What are some alternatives to anticholinergics for seniors?

Because there are so many drugs on the market, there are alternatives for just about every anticholinergic prescription medication and over-the-counter remedy. Of course, no one should stop taking prescribed medication without talking to their doctor first. If you’re concerned about the potential effects of anticholinergic medicines on yourself or your parent, take all your medications (or your parents’) to your next appointment for review.

18 Smartphone Apps Seniors Should Check Out
Paying for Respite Care